LEGO has just released a brand new sports car in their Creator Series, the LEGO Ferrari F40 and so far fans are loving it!

This LEGO model is based upon the Ferarri coupe built between 1987 and 1992, which became a classic because it was last car they designed that was officially approved by Enzo Ferrari.

According to Wikipedia, this real sports car originally sold for around $400,000, but now can go for as much as $1.6 million. But don’t worry, if that’s a little steep for you, LEGO has you covered. The LEGO version is retailing for around $100, which is perfect for fans who want to test drive this coupe.

Here are the stats for this set:

Pieces: 1158 – This is pretty good piece count for a creator set.

Minifigures: 0 – Many of these expert builder sets don’t come with minifigures, so it’s not really a big deal that they didn’t include them.

So why are fans flipping out over this LEGO Ferarri?

Well, there’s a couple of reasons. Since there were only 1,300 of these ever made, a LEGO model is a perfect way for more people to enjoy the car. There are also LOTS of interesting building techniques they use with lots of angles and hinges. LEGO reviewer JangBricks was particularly impressed with the flip up headlights and the engine. 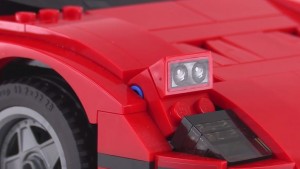 As well as an awesome interior! 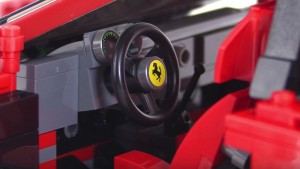 Images from JangBricks review, which can be watched here.

But by far, the biggest reasons fans love this set is that Ferrari fans absolutely love this iconic sports car and it’s very important to them that LEGO get it right. And according to most reviews so far, it looks like LEGO did it perfectly!

Check out the great speed build video from Brick Builder!